When the two materials are in contact and separation, the polarity and size of the charge are represented by the position of the material in the friction series. The friction series shows the charge generated on the various materials. When the two materials are in contact and separated, a positive charge near the top of the series and the other is a negative charge. The material that is further separated on the table usually produces a higher charge that is closer together. However, these tables can only be used as general guidelines, since many variables are not well controlled to ensure repeatability. Typical series of triboelectric motors are shown in Table 2. 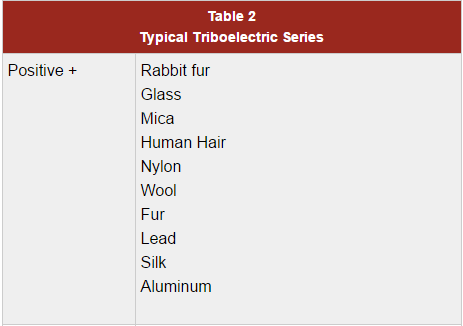 The charging material also has an electrostatic field and a force line associated therewith. The conductive object introduced near the electric field will be referred to as the induction process polarization. Figure 3. The negative electric field will repel the electrons on the surface of the conductive article exposed to the field. The positive electric field will attract electrons close to the surface, so that other areas are positively charged. The actual costs on the items will not be biased. However, if the article is conductive or dissipative and is connected to the ground at the time of polarization, the charge will flow or be grounded due to charge imbalance. If the electrostatic field is removed and the ground contact is disconnected, the charge will remain on the item. If the nonconductive object enters the electric field, the electric dipole will tend to have a surface charge relative to the field. Non-conductor (insulating material) can not be charged by induction.