Many new film products must reduce static charge. The surface of a multilayer network formed by coextrusion, lamination or coating is designed to deliver functionality to the customer, including the surface wettability of the receiver, the adhesion of the laminate and the mask film, Enhanced optical properties and reflective films as well as chemically active surface products and a new generation of sensors for clinical diagnosis.

These surface electrostatic charges caused by the vacuum must be minimized, some of which are sensitive to chemical changes caused by discharge. Products built on flexible substrates such as RFID and printed electronic components can achieve electrostatic discharge (ESD) sensitivity to roll-to-roll manufacturing.

Static joysticks are very effective in controlling the static aspects of motion and require excellent static control products and robust performance. In the sense that the static bar is needed in the sense of power is "active ionizer". Many static bars use sharp needles that are positioned along the length of the rod to produce ions. To see how these static bars work, let's look at the basic "pin-to-board" discharge geometry shown in Figure 1. 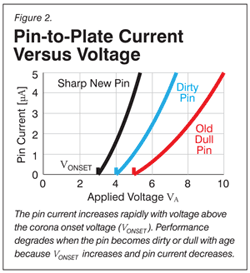 The formation of corona ions is the process of generating the chemical activity of ozone and nitrogen oxides. With the ambient air moisture humidity, the formation of nitric acid. Over time, these corona by-products passivate the tip, which further reduces performance. In Figure 2, the "old blunt needle" corona starting voltage increased to 5 kV, VONSET above 1 kV current is only 0.5 microamps.

Therefore, it is important to clean the pins in the static strip. Follow the manufacturer's recommended cleaning procedure. This usually requires a soft brush according to a fixed maintenance schedule, which may brush once every few months. In addition, the output current of the ionizer should be checked after cleaning. Some new static bar systems show the neutral current (pin current) so that you can verify the performance of the static bar.

Electrostatic bars are very effective for dissipating static electricity because they produce many corona ions. Cleaning can maintain good performance.